Dior 5 Couleurs Couture 849 Pink Sakura Eyeshadow Palette is a true beauty and a limited edition release part of their Spring collection. If you are into pink and purple shades but in a soft version then keep on reading. I have live swatches and two makeup looks waiting for you after the jump. 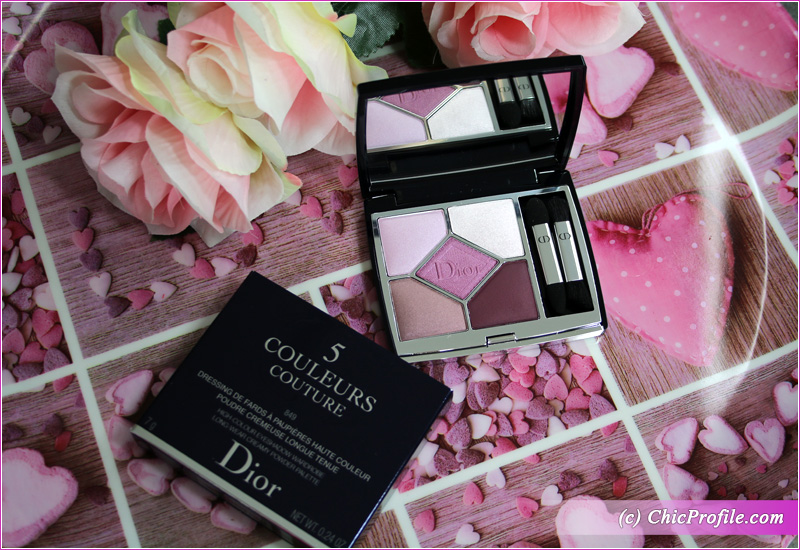 Dior 5 Couleurs Couture (849) Pink Sakura ($63.00 / £48.00 for 7 g/ 0.24 oz) is a new and limited edition long-wear creamy powder palette with cool toned shades or violet-pinks, burgundy and light pink champagne. The quint offers a variety of textures and colors with different levels of pigmentation.

The colors were pigmented, applied well and blended easily (with the exception of the darkest shade) and lasted around eight hours on me. You have just the right shades in here to create a softer pink-violet look or a more intense one using the darkest shade in the palette. The colors are quite dupable and this quint reminds me of an old release, Dior Thrill 5 Couleurs Eyeshadow Palette (review, swatches).

Another similar palette is also a limited edition release of Dior Sweeten 5 Couleurs Eyeshadow (review, swatches). Basically if you have these, I would just skip the new Pink Sakura release, unless you are a die-hard Dior fan. I had all these palettes but I sold them in the meantime so I allowed myself to purchase our beautiful Pink Sakura. 🙂 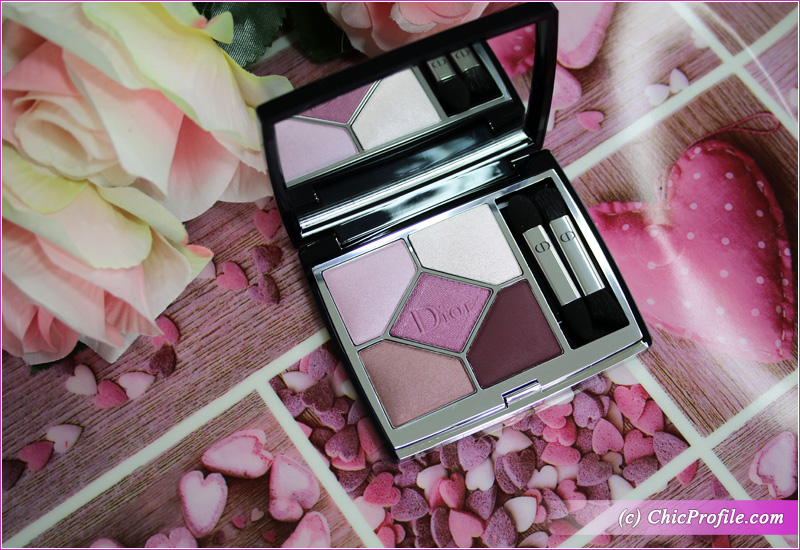 It has the same packaging as the new existing quints from Dior which were re-released for Fall 2020. It has a mirror inside and two dual-ended applicators in a dark compact that snaps shut. Since I passed on the new permanent quads I didn’t know that Dior skipped the velvety cover pouches that were protecting the palette. Apparently those won’t be a thing anymore even though I got them with my new Trioblique Eyeshadow Palettes (review, live swatches, makeup looks).

Here we have swatches in two layers applied on bare skin and photographed under natural light. For the darkest shade I had to even out the coverage as it swatched patchy and uneven. On the eyes it performs differently, being pigmented but hardly blendable around the edges. I posted LIVE SWATCHES under natural, sunny light actually if you guys want to see them. 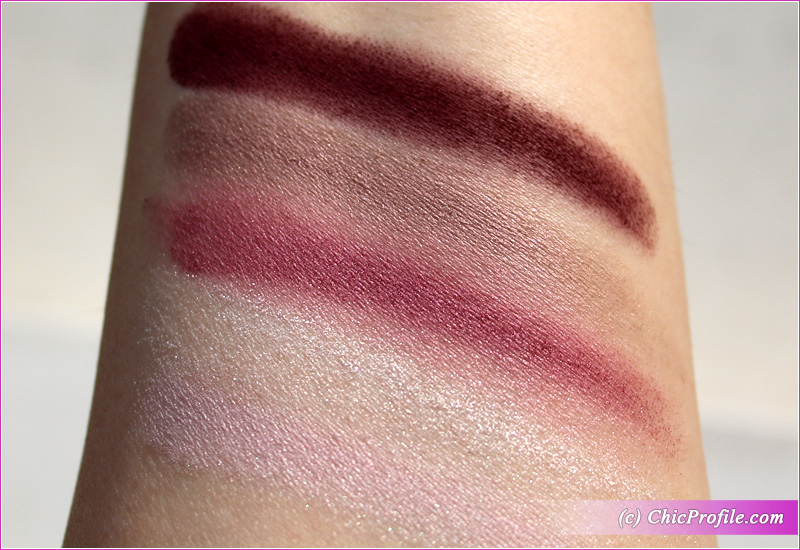 Dior Pink Sakura #01 is a very light pink-lilac with soft cool undertones and a satin, luminous sheen. It had a good color payoff being semi-opaque in a single layer applied dry. The color performed well and actually showed more pigmentation on my lids than it did swatched.

The texture is very soft, smooth, applies evenly and adheres well. It’s easily blendable and gives no fall out during the application. I had around seven and a half hours wear with this shade before it started to fade noticeably. I like the luminosity and soft appearance that it gives to the entire look and it’s a perfect Spring or daily wear eyeshadow.

Dior Pink Sakura #02 is a light white base with pink sparkle and shimmering finish. It’s just more of a wash of color where the shimmer adds luminosity. It’s a topper shade that can be intesified a bit when applied with a damp brush. This way you’ll avoid fall out and make it adhere better onto the lid.

The texture is a bit dusty and powdery in the pan but feels smooth to the touch. It pairs well with the other shades and wore on me for about seven hours with minor fall out throught.

Dior Pink Sakura #03 is a medium taupe with mauvy, cool undertones and a satin finish. It had an excellent color payoff even swatched or applied in a single layer on bare skin. It applies evenly and blends easily being buildable to full opacity in one a half layer.

It’s an interesting shade to be honest which can work for a day time look as a nude with a twist. I personally love this shade and I used it as a transition shade in 3 of the makeup looks that I created with this quint. The texture is soft and silky to the touch without being hardly pressed into the pan or powdery. I got around eight and a half hours wear without fall out, before it started to fade on me. 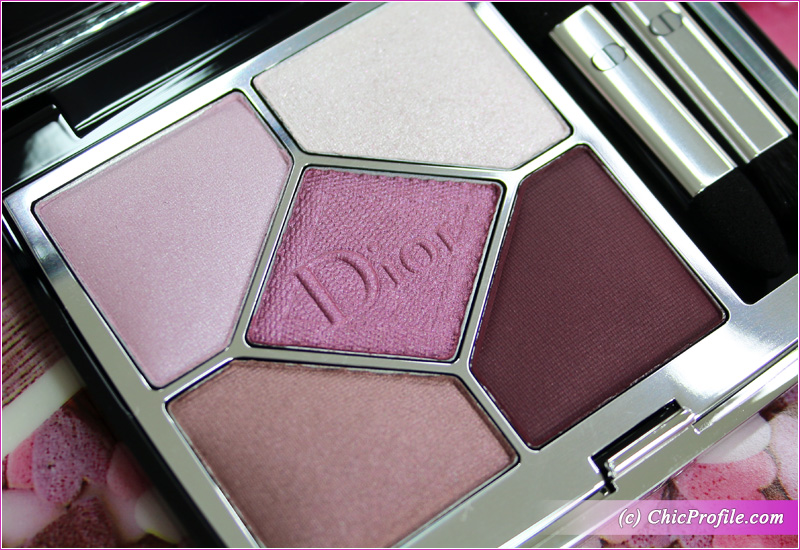 Dior Pink Sakura #04 is a dark, deep eggplant-burgundy with cool, slightly berry undertones and a matte finish with sparse silver shimmer. The shimmer is almost not noticeably when I applied the color on the lid so it’s more of a matte finish. It was pigmented in a single swipe but the color looked patchy and it definitely needed a second layer.

The texture feels a bit dry without kicking off dust in the pan. For me this was a challenging shade that made me work it in different ways to see how it would work best. You’d see straight up pigmentation if you’ll apply it with dry but it performed better on me applied with a damp brush. When I used it as a liner or just on the outer corner of the lid to add some depth it performed well. I used a pencil brush or a soft dome brush and just slightly added a bit of color.

The problems began when I wanted to create a smoky purple eye using just this shade. So I started patting it onto the lid using a flat brush (MAC 239 Brush or MustaeV E23 Large Fluffy Shadow brush) and adding a second layer to even out the shade. The blending was challenging because it was very hard for me to diffuse the edges going up into the crease. I tried adding the taupe shade but it was hard to merge with the darker shade.

It stayed well on me for about eight and a half hours with no fall out before it started to fade noticeably.

Dior Pink Sakura #05 (center shade) is a medium plumy-pink with cool, mauve undertones and a satin, very soft matte finish. It had a good color payoff being easily buildable to full opacity in two layers. This is the surprise shade in the pan as I like to call it and it will lean either pink or mauvy depending on how the light hits.

The texture is super smooth, silky and soft to the touch while the color applies and adheres well on the lid. I didn’t get any fall out during the application. It’s easily blendable and can work applied wet but I didn’t see that much of a difference in pigmentation. I got around eight and a half hours wear with this formula before it started to fade on me.

For this first look in which I used all the shades in the palette I have a video makeup tutorial here! Depending on how the light hits the makeup leans pink or violet. 🙂 I couldn’t help adding a bright pink color on the lips but let’s check the list of the products I used bellow. 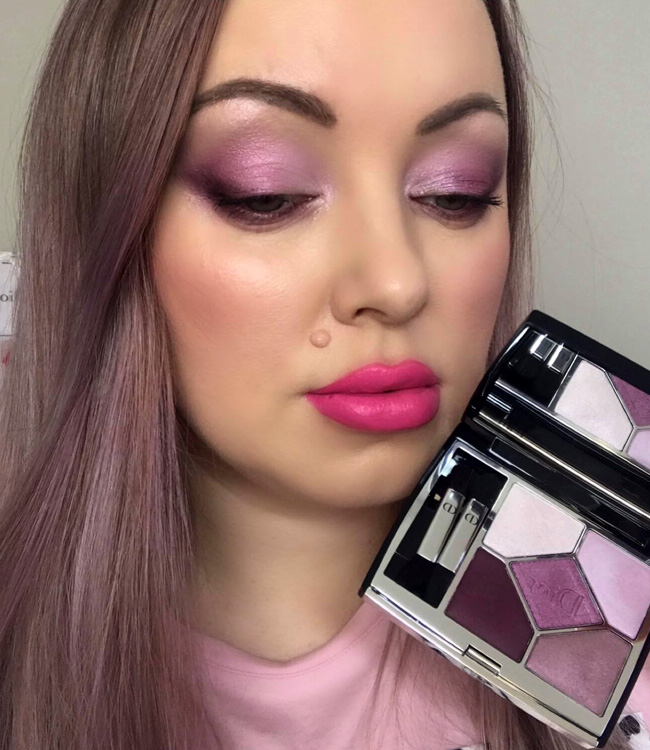 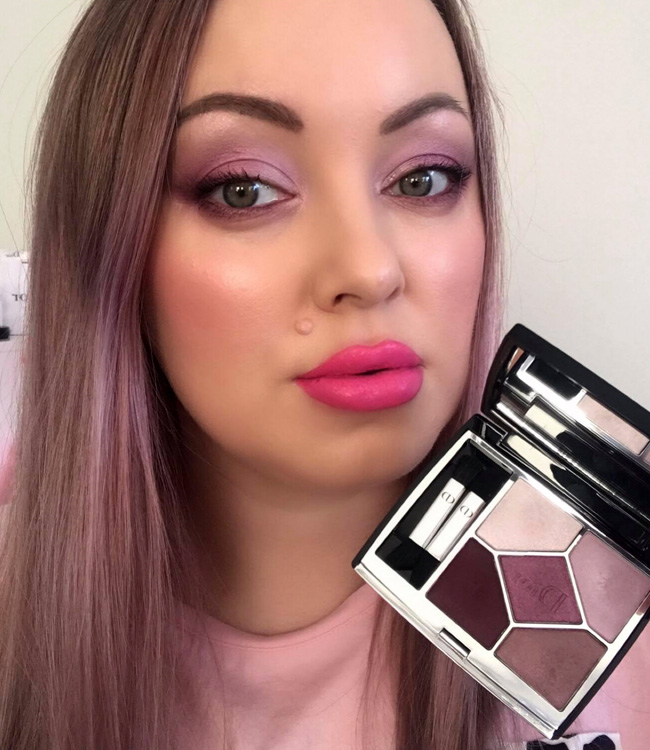 This is the second look I did with the palette and I wanted a purple smoky eye look, very simple, using the darkest shade. You can check out the video makeup tutorial here! 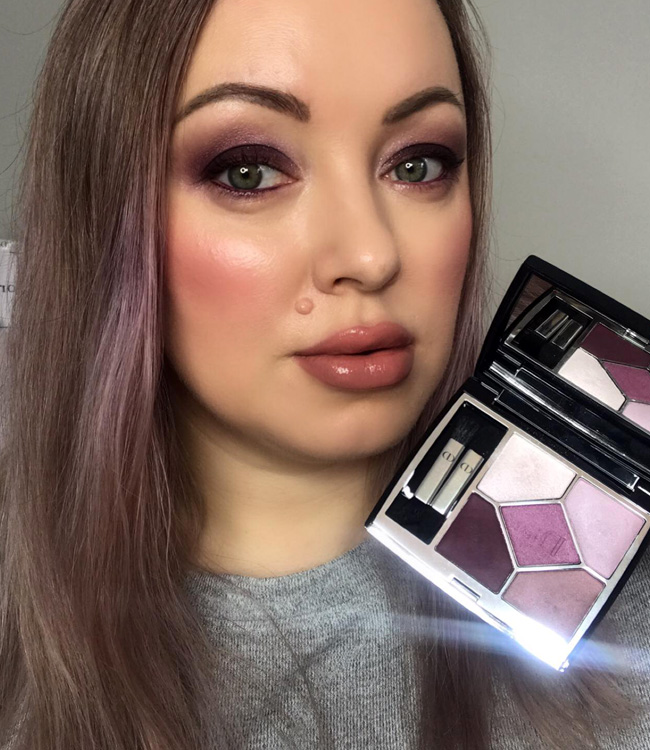 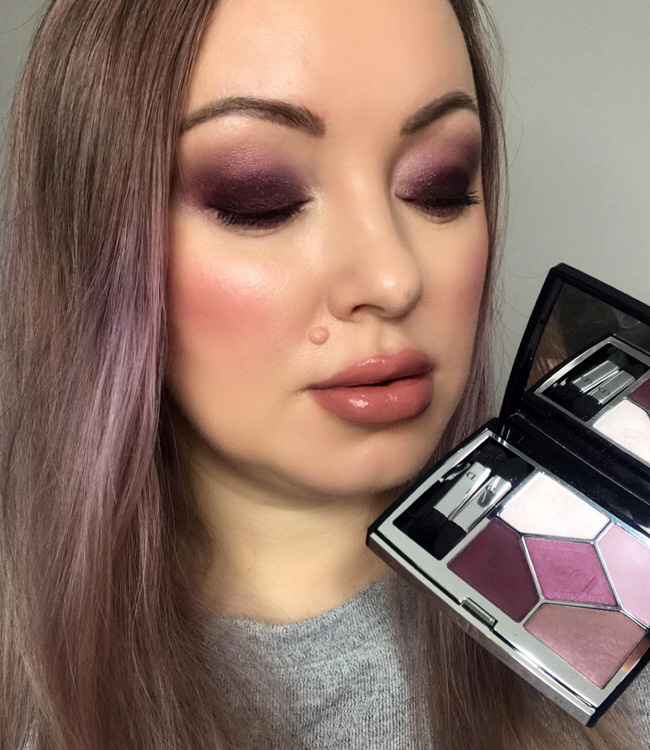 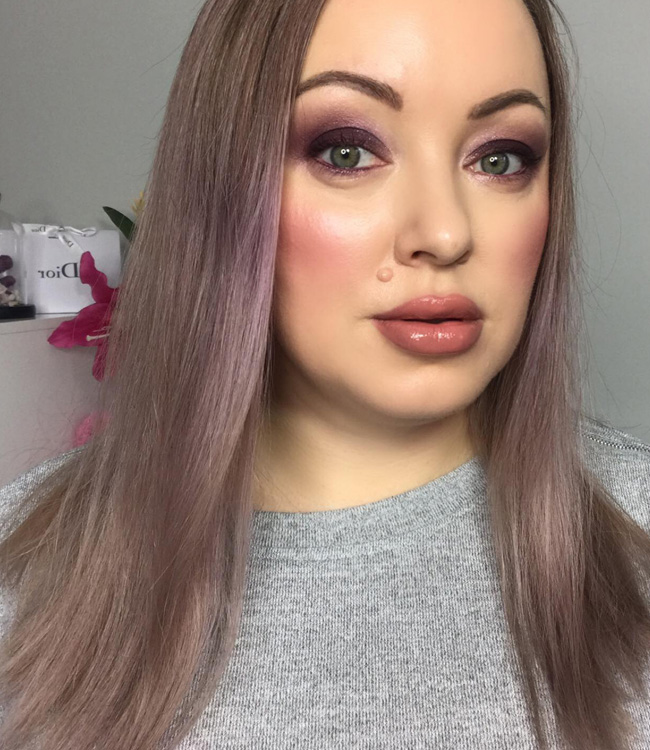