Dior Golden Nights Holiday 2020 Collection is one of the most expected makeup launches of this season. So far I bought Dior Golden Nights (549) Golden Snow Eyeshadow Palette which I’m reviewing today and 089 Black Night Palette which I’ll be reviewing afterwards. Once the collection launched online these two limited edition quints sold out in a blink of an eye. Selfridges kept restocking them but they kept selling out. Now I just checked and they are re-stock again so hurry if you want to add them to your shopping cart. 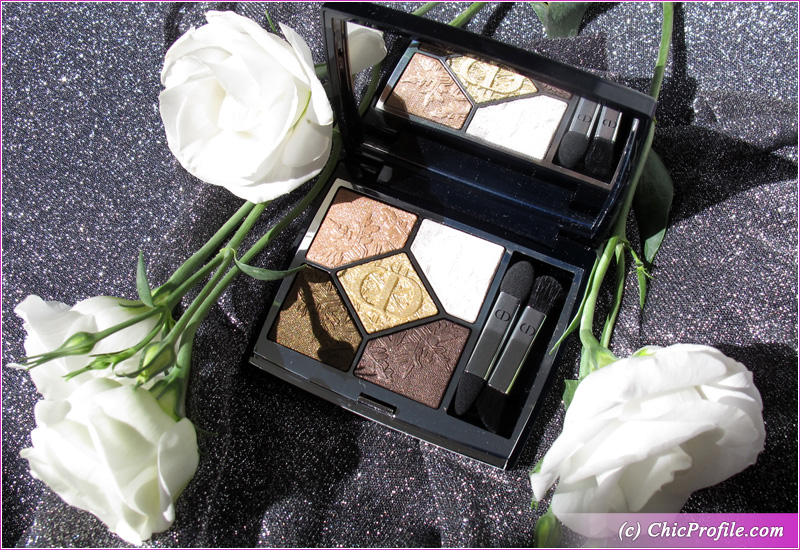 Dior Golden Nights (549) Golden Snow Eyeshadow Palette (£50.00 for 4 g/ 0.14 oz) is a limited edition warm-toned palette that features five shades for the holidays. Overall, it was just all right; it had some powdery, fall out during the application. I can’t say it’s a great palette with an impecable formula or that is long lasting.

The color payoff was so-so, the top three shades come semi-sheer swatch in a single layer. The bottom 2 shades have more pigmentation and you can build them up to full opacity. I had minor fall out (which is notable) with the two shimmery eyeshadows, but they adhered better than the average Dior shimmer eyeshadows. 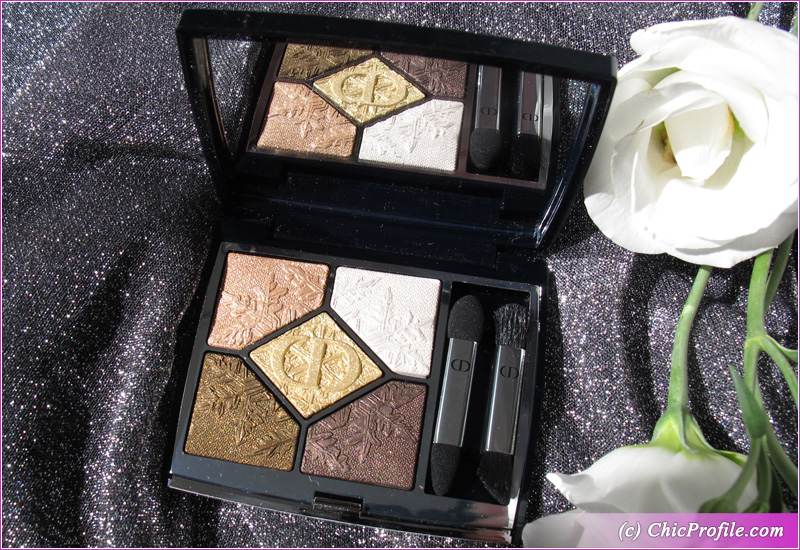 One important thing that I want to mention in comparison to the new Dior permanent quints that were released for Fall 2020. Both Dior Golden Nights Holiday 2020 quints contain only 4 grams / 0.14 oz of product while the permanent ones have 7 grams/ 0.24 oz. So basically the beautiful snowflake pattern and the fact that these are limited edition is going to cost us more while we receive almost half the quantity of product.

I wanted to mention this because it may be a important detail for some of you. Some of you guys asked me which palette I would choose between this one or Tom Ford First Frost Eye Color Quad (review) or Dior Jungle (579) Eyeshadow Palette (which is very similar btw). So you may want to consider also the price point and quantity of product that you are getting when you are trying to decide which palette to buy.

Here I have swatches of Dior Golden Nights (549) Golden Show Eyeshadow Palette in a single swipe applied dry over bare skin (no eyeshadow primer, base). Also take a look at LIVE SWATCHES which I took in natural sunny light so you can see the beautiful glistening of the shades. 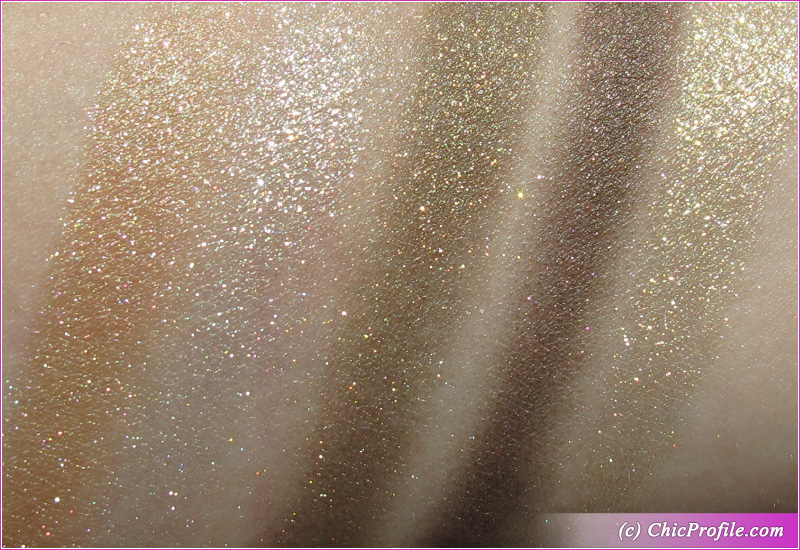 Do you guys remember the Dior Golden Snow quint that was released back in 2014? Apparently Dior kept the same name but changed the color a little bit this time. 🙂 Unfortunately I don’t have the old edition of Dior Golden Snow as I would have loved to do a comparison.

Golden Snow #1 is a light peachy-beige with warm undertones and a soft sheen paired with fine shimmer. It had a good color payoff in a single layer being semi-opaque in two layers. The formula is soft and silky to the touch but firmly pressed into the pan so you may want to use a flat dense brush.

I like to use my fingertips as well when I want to apply this shade over my lid. It’s easily blendable and when I use a fluffly brush (MAC 217) the color tends to sheer out. It blends well along the edges and holds on for about eight hours before it stars to fade away.

Golden Snow #2 is a bright white-silver with neutral undertones and an intense shimmer finish. It had semi-sheer color payoff in a single layer which was slightly buildable to medium opacity. I’d use this shade as a topper or just a soft wash of color, to highlight my inner lid corner. It will look beautiful applied as a topper over the lid but on its own it won’t give you an opaque color.

The texture was soft, smooth and quite firmly pressed in the pan which gave me a bit of fall-out during the application. This color can work well applied wet and give more of a luminous effect but nothing to intense. I had around 7 and a half hours wear with this formula before it started to fade away without creasing. 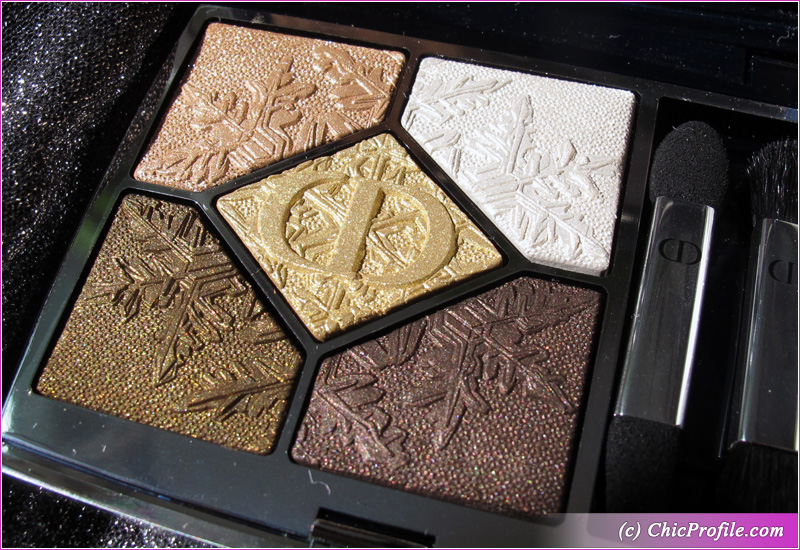 Golden Snow #3 (center shade) is a light, soft gold with warm undertones and a shimmer finish. It was quite sheer when swatched in a single layer (on bare skin) and I could build it up and in two layers to a slightly medium intensity. It’s a bright gold but doesn’t have a solid base so it’s more about the shimmery luminous finish rather than getting an opaque color.

I’d just use this to add luminosity to my makeup look or applied as a topper. The texture is soft, smooth and quite hardly pressed in the pan. When I apply it with my fingertips I get an even color coverage but just a wash of gold, nothing to intense. I’m sure that some of you prefer more softer shades, not overly intense or fully pigmented in a single swipe. This is a more forgiving gold so to speak.

It blends easily but tends to sheer out and gives some minor fall out. I got around 7 and a half hours wear with this formula without creasing.

Golden Snow #4 is a medium olive green with soft yellow undertones and a satin gold shimmer finish. It had a good color payoff in one swipe, being semi-opaque in two layers. The color is definitely more intense and has more pigmentation than the previous 3 shades.

The texture was dense, lightly creamy, and slightly thicker compared to the other shimmers in the palette, but it wasn’t heavy or difficult to pick up with a dry brush. I didn’t have fall out over time with this shade and it wore well on me for about eight hours. 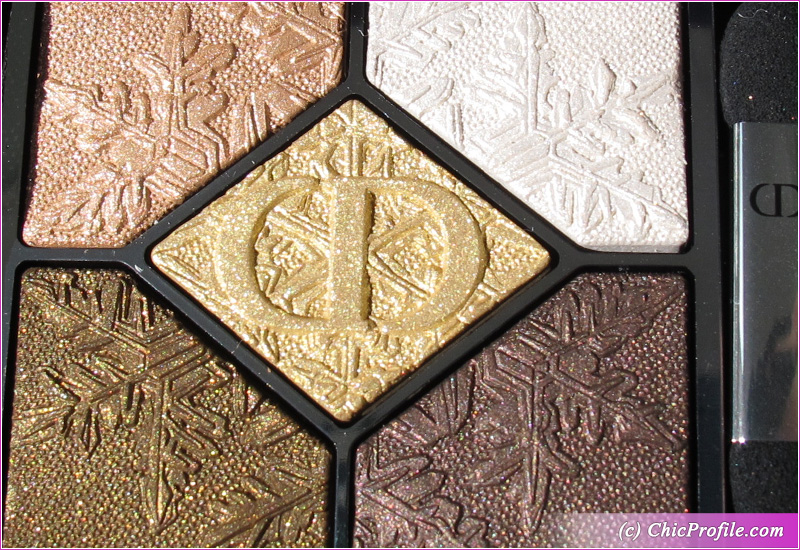 Golden Snow #5 is a muted, medium-dark taupe-brown with subtle, warmer undertones and a satin finish. It had almost opaque color payoff in a single layer swatch on bare skin. The texture is soft and smooth with a consistency that was firmly pressed into the pan.

I had no trouble applying the color, even on bare skin and blend it out easily. I could intensify the color on my outer V with just a second layer. The color wore well for eight hours before fading noticeably. 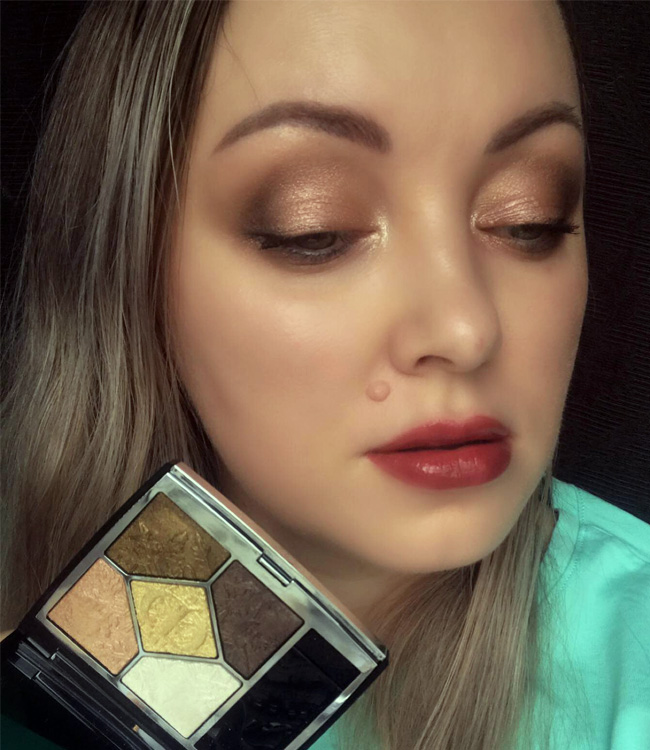 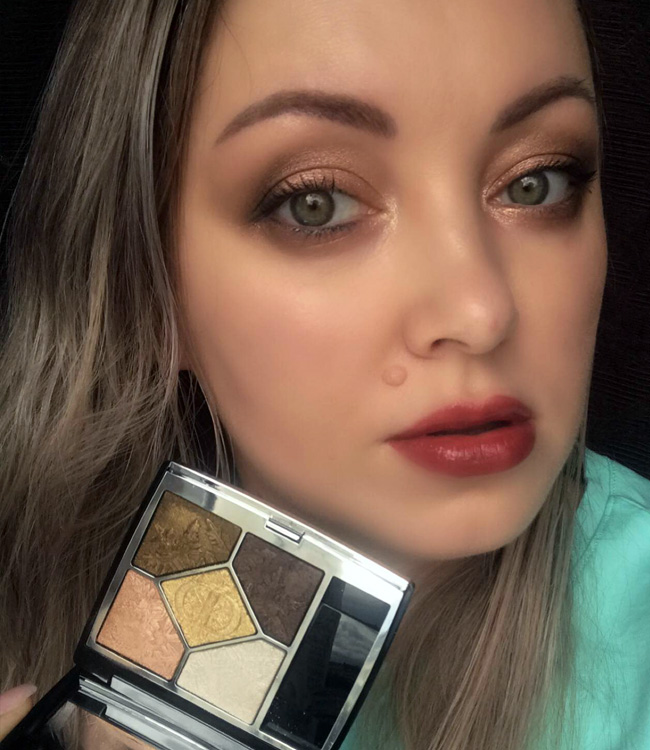 Thank you for this indepth review of the new Dior palette. It is worthwhile to note the amount of product you get for the price and I think Dior is being a bit sneaky here, offering far less than usual.
Your eye looks are beautiful.