Viseart Violette Etendu Palette was released about a month ago and after wearing it a few times, especially for my Birthday Look, I’m ready to give you a full review. If you are obsessed with purple, lilac and violet shades then taking a look at this palette is the right thing to do. I have LIVE SWATCHES and shade by share review after the cut. 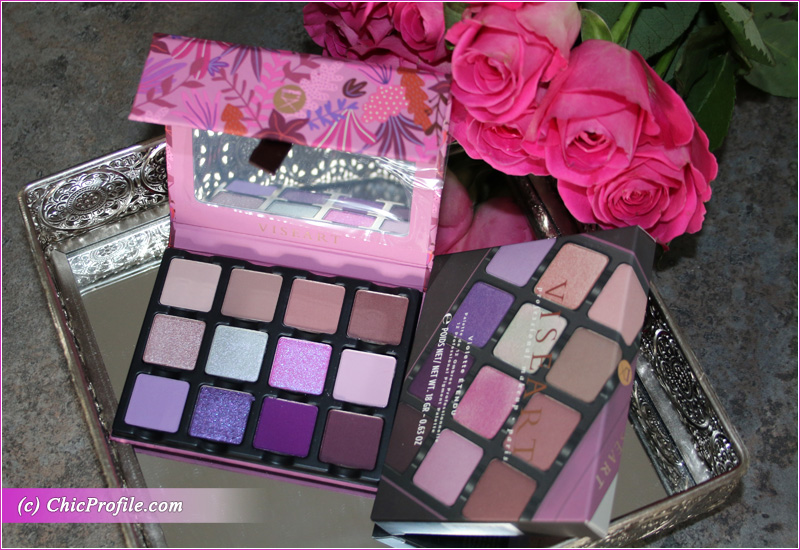 Viseart Violette Etendu Palette ($44.00 / £30.00 for 0.63 oz./ 18 g) is a new palette created as an extension of Liaison Palette, therefore you’ll find an overlap between the two. If you already have the Liaison it wouldn’t make that much sense to buy the new Violette Etendu unless you are crazy obsessed over Viseart and purples.

Pinks and purples are my favorite shades so I was looking for a new palette with good purple shade. My last experience with purple eyeshadows was when I bought Urban Decay Naked Ultraviolet Palette (review, live swatches, makeup look) so I was looking for something better.

I’m still experimenting with Viseart Eyesahdows as my collection is pretty small but I find the mattes to be very powdery even though they are smooth and soft to the touch. There’s just too much excess powder in the pan whenever I swatch the shade or pick them up with a brush.

I don’t know if I said it before but to be honest I’m not a fan of Viseart packaging when it comes to eyeshadow palettes. I mean the outside is pretty, very colorful but the opening is not something that I prefer. It could be just me but I prefer it to keep it simple and have the palettes open as normal and not unfold like that. Apart from that I have no objections as I like the inside, they always come with a mirror, super easy to depot and create your own custom palette. 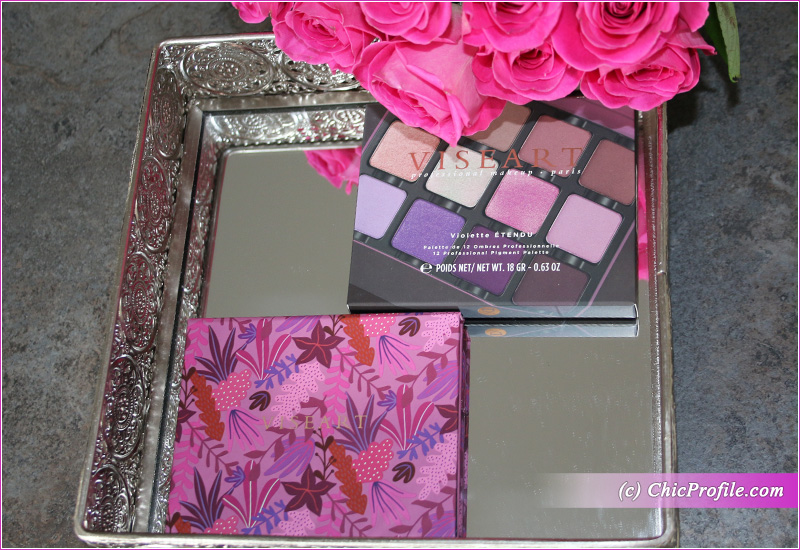 Here you have swatches applied in two layers on bare skin without any primer underneath. I took these first swatches in natural daylight but you can head over to my Instagram for LIVE SWATCHES if you want. 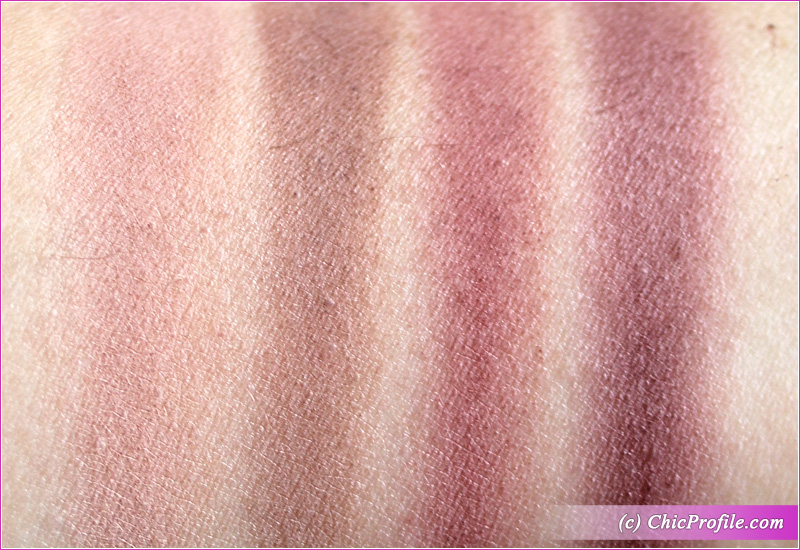 For this second row, I applied two layers of each shade and I took the photo under natural sunlight. 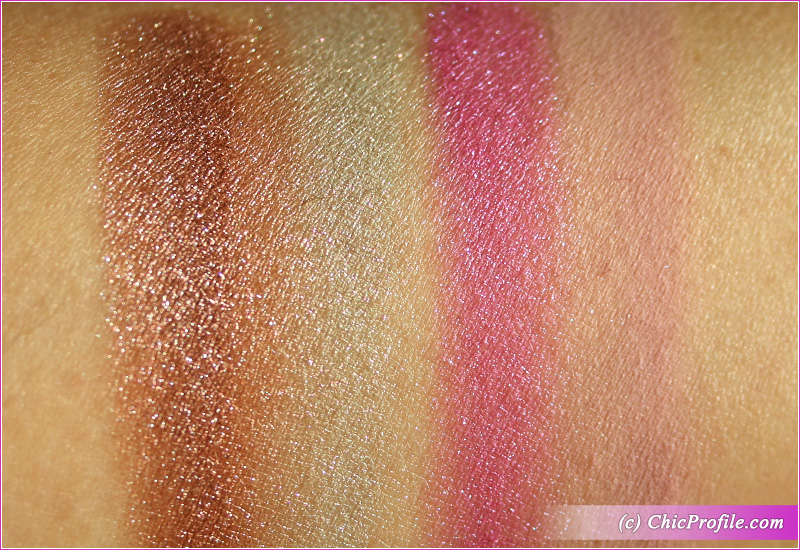 Last but not least we have the purples which were swatches in two layers as well and under natural light. 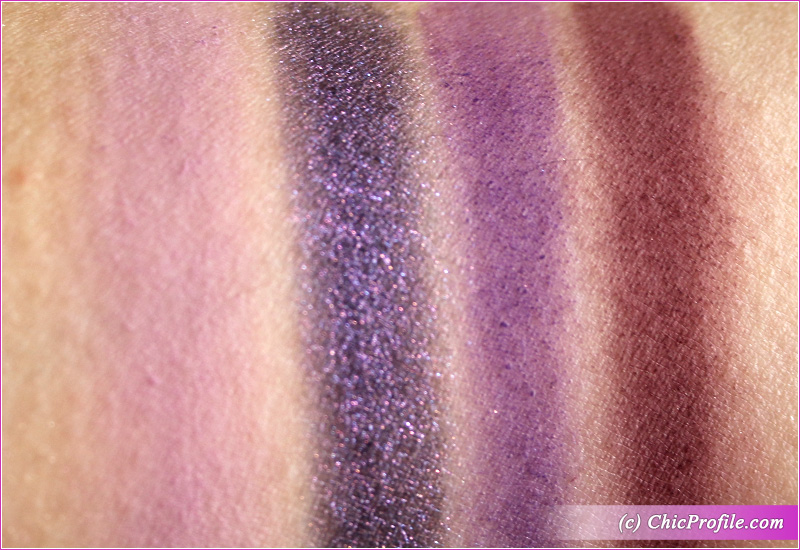 Embrace is a light, rosy mauve taupe with slightly warm undertones and a matte finish. It had opaque color coverage in one and a half layer when applied dry. The texture is slightly powdery so it gave me fall out during the application and tended to sheer out when blended. It gave me around seven and a half hours wear before fading.

Blushing is a medium, muted taupe which leans slightly plummy with cool undertones and a matte finish. It was pigmented but I needed to build up the shade for full opacity. It had the same soft powdery texture that felt smooth smooth but caused fall out during the application. Blends out easily and applies well but you just need to build up the color a bit. I had around eight hours wear with this formula.

Grenache is a medium soft mauve with cool undertones and a matte finish. It looks like a nude in the pan but it definitely swatches as a mauvy shade. It had a good color payoff, being rich even when applied on bare skin. It blended out easily and had a soft, smooth and slightly powdery texture. I can’t say that I had fall out during the application, nor did it sheer out when blended so it definitely performed better than the 2 previous matte shades. I noticed signs of fading after 8 hours wear.

Fusion is a muted, merlot-mauve with neutral-to-warm undertones and a matte finish. It had semi-sheer color payoff applied in a single layer but buildable in 2 and a half layers to semi-opaque coverage. The texture was very smooth and silky, even smoother than the previous 3 matte shades, but still powdery and caused fall out. I feel that you just need to work very light with each color and build it into place before starting to blend it so you’ll avoid fall out. 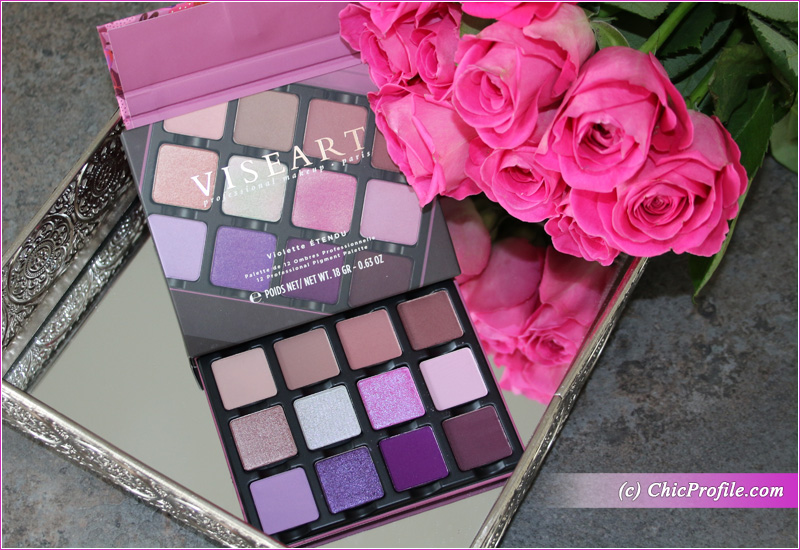 Bisous is a muted, medium lilac with slightly warm undertoens and a shimmer, metallic finish. It was almost opaque when applied in a single layer which can definitely be intensified especially with a damp brush. It applies well and adheres well even on bare skin without fall out. The texture was smoot, moderately pressed into the pan and very easy to pick it up with a brush or fingertips.

I like to use my fingertips to pat the color into place (or a damp brush) and then just softly blend the edges. It wore well on me for about eight and a half hours without creasing, before I noticed it started to fade away.

Wink is a light aqua-blue turquoise with soft shimmer that shifts from pink to violet. Viseart calls it a duochrome finish but I see it more as a shimmer and sparkle kind of eyeshadow. It had semi-opaque color coverage that transfers very softly onto the eyes so you can mostly use it as a base or topper. The formula was soft, loosely-pressed in comparison to rest of the shades but not as powdery as them. I could easily pick it up with a damp brush and it blended out nicely. In terms of longevity I got around eight hours wear before it started to show signs of fading.

Jezebel is a bright, pink-magenta with cool, blue-to-violet shimmer and a very soft metallic sheen. Again Viseart calls this shade a duochromatic shift but I’m used to getting a more intense shift from a duochrome and definitely more pigmentation. It had semi-sheer coverage applied dry and in a single layer which was nearly buildable up to a medium opacity with a damp brush. The consistency is creamy, moderately-dense but it still gave me minor fall out during the application. It stayed well on me for about seven and a half hours before fading noticeably.

Liaison is a muted, light lilac with cool undertones and a matte finish. It had semi-opaque pigmentation when applied in a single layer but definitely buildable with a second layer. It applied well even on bare skin and it was easily blendable while it gave a minor fall out during the application. The texture was soft but quite powdery so I got a lot of excess powder into the pan. It stayed well on me for about seven and a half hours. 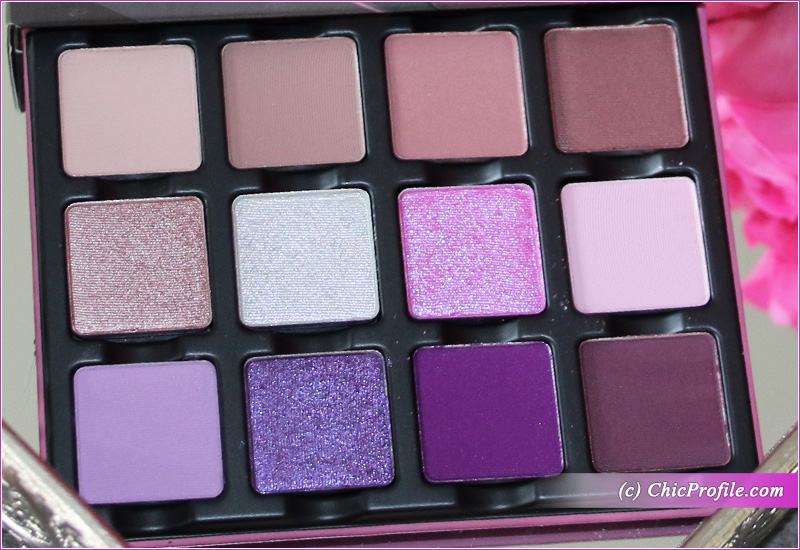 Haze is a very light, soft lavender with cool undertones and a matte finish. It had semi-sheer pigmentation which was buildable to semi-opaque in three layers. The consistency was soft, smooth and slightly powder which caused fall out during the application. It was easily blendable but it tended to sheer out. In terms of longevity I got around seven and a half hours wear with this formula.

Violette is a medium-dark, muted violet with cool undertones and pink shimmer with a pearly sheen. It had a medium color coverage in a single layer and the best way to apply it is buy using your fingertips. I tried using a damp brush but I still got better grip, opacity and better results overall when I used my fingertips. The texture was very smooth and silky to the touch and felt quite emollient too. You’ll have to mind the application and the way you blend out this shade because you can end up with an uneven color. It had a good wear for about seven hours.

Passion is a medium dark vivid purple with cool undertones and a matte finish. It had semi-sheer pigmentation in a single layer which was buildable up to a medium opacity in two and a half layers. It blended out easily but tended to sheer out. The texture was very dry, thin but without being powdery. This shade along with Elderberry were the only two dry matte textures in this palette. It lasted well for about eight and half hours on me leaving a stain behind.

Elderberry is a deep, dark plum with slightly warm undertones and a matte finish. It had semi-sheer coverage, slightly buildable to medium in two layers. With this color you are just gonna have to be patient and built it up in several layers if you want more intensity. I just lack the patience of taking 5 minutes only to work one shade to darken out of my outer corner of the lid. The texture was thin, firmly-pressed and felt very dry to the touch. I would definitely work on this formula in the future as well as the Passion shade and improve it. It stayed well on be for about eight and a half hours.

I used Viseart Violette Etendu Palette for the first time in this makeup look which I wore for my Birthday back in December. I know purples complement beautifully green eyes so this is the effect. What do you guys think? You can watch the video tutorial for this look right here. Make sure to follow me on Instagram as well as I always post videos there! 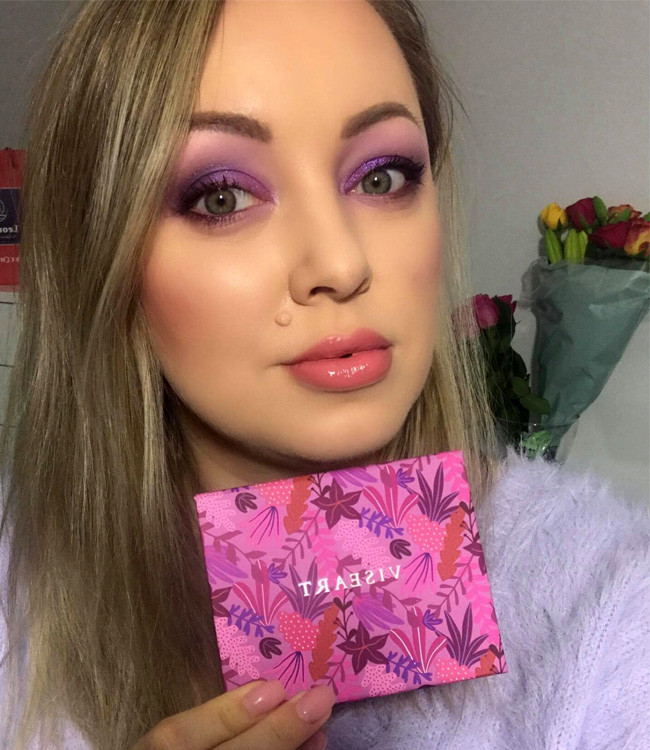 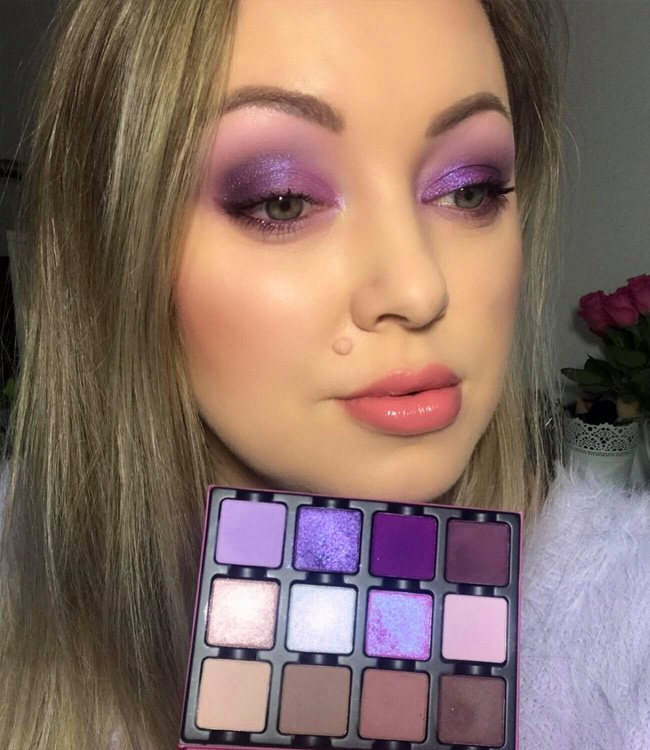 Now for this second look I actually used mostly the nude shades from the palette which lean towards soft plums and muted purples anyway. I added an eye liner to make it more sophisticated….I’m still practicing with eyeliner so don’t to be harsh on me. Of course I couldn’t help throwing a bright hot pink lip color at the end. You have the video tutorial right here! 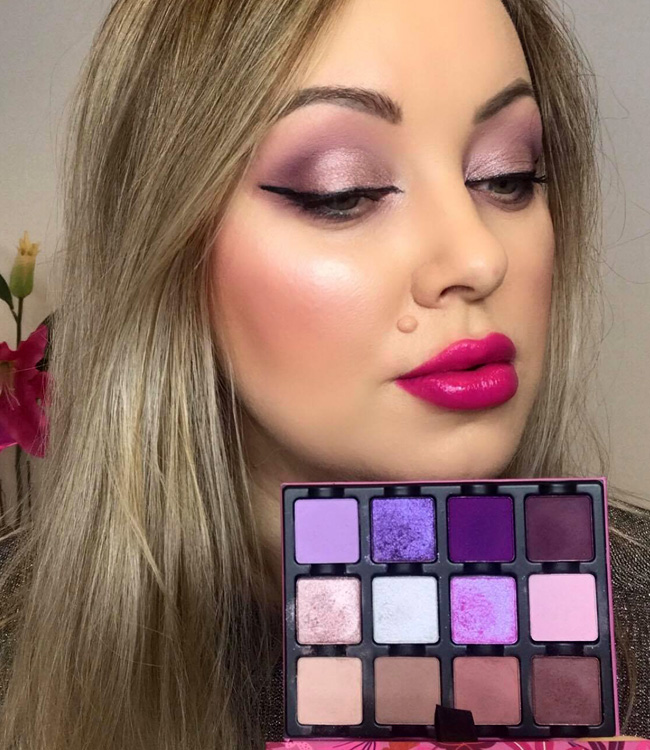 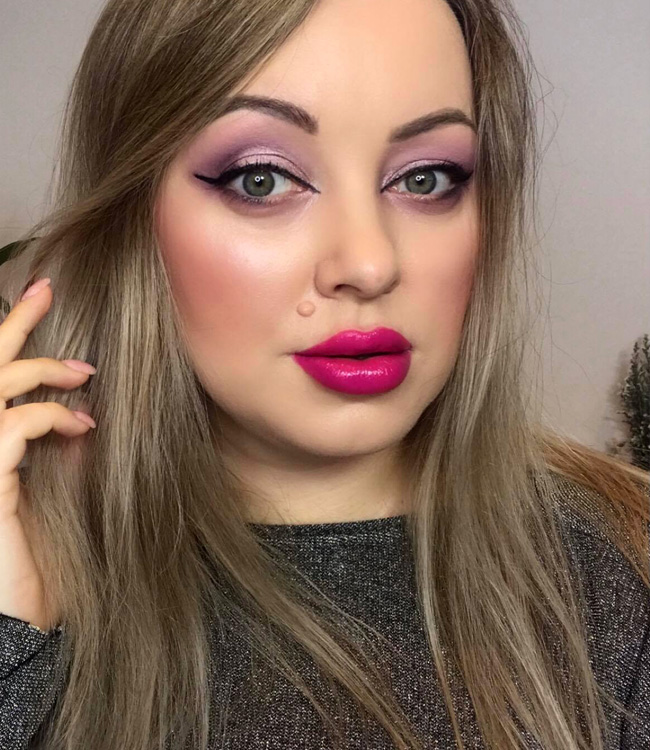